England’s Women put their game on the map 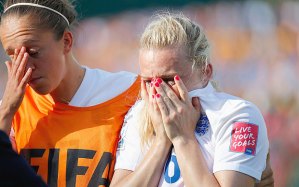 It ended in tears but the Lionesses should come home with pride. Source: The Independent

Thursday morning’s result was a real gut-punch after such a superhuman effort but England has every right to be proud of the Lionesses’ performance over the whole tournament. They came in without much fan-fare, expected to disappoint but instead they won the hearts of a nation and put the Women’s rightfully in the spotlight.

Going back to the European Championships two years ago, England were dumped out of the group stages with a lot of embarrassment. Out went a lot of the old guard, including Hope Powell, and the remodel of the team started.

Heading into the tournament in Canada, this England team wasn’t under a great deal of pressure and weren’t expected to go too far. In fact, after their opening loss to France, some predicted that they’d be coming home early.

How wrong they would be.

Lucy Bronze has been excellent and is nominated for the Golden Ball award. Source: The Guardian

Two wins against Mexico and Colombia saw them through to face Norway, a challenge that to some could have been insurmountable. The Lionesses hadn’t won a knockout game in World Cup history but they snapped their duck in style, winning 2-1 and heading to Vancouver to take on the hosts Canada.

Many thought this would be the stopping point but no, a strong first 20 minutes blew Canada away and despite having to cling on in the end, England made the semis. They had an incredibly strong showing against the reigning champions Japan but the football gods are cruel.

Despite being on top, especially in a 20-minute period at the start of the second half, a freak own-goal in the final moments ended their final hopes. They beat all expectations, putting in an excellent display against a side many predicted would steamroll them, and they’ll return home after the third-placed playoff as heroines.

Mark Sampson has done a superb job in charge of the Women’s national side. Source: The Guardian

What was really great to see was how this England team really encapsulated what English fans love to see. They worked hard, they pressed the ball in an attempt to suffocate the opponent and they weren’t afraid to put themselves about and go in where it would hurt.

It was a full-blooded display, especially in the knockout rounds, where sheer enthusiasm and team spirit elevated them to levels even they may not have expected to reach. That’s what captured a nation that barely noticed them before the tournament and now will warmly embrace them once they step off the plane next week.

Credit has to go to the WSL too for laying the foundations but the national side have laid that first brick in putting themselves and the women’s game into this countries subconscious. Hopefully there will be a knock-on effect from this, hopefully there will be less of the constant comparisons to the male sides and that a new generation of girls will be inspired to pick up the sport too.

If anything, it should bring some more supporters to the excellent, and very cheap, WSL. I’m certainly invested in going to watch the Notts County Ladies, a ticket is just £6 for adults and I hope others will follow suit.